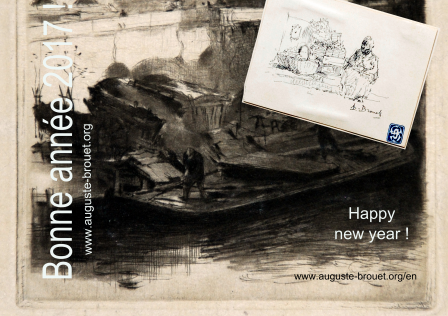 A compound of Brouet artwork, passed down over roughly a century by a series of Brouet enthusiasts, starting with the most prominent of them, Georges Grignard himself... I personnally thank them all!

Let me thank also all who have visited this website in the past years, be it for a brief survey or a more in depth exploration.

Here are some news on the project. The catalogue raisonné itself has not changed much. It seems no significant number of hitherto unknown prints have surfaced recently. My latest efforts have focussed more on the context in which Brouet worked, and the result has taken the form of blog posts[1] . For practical reasons, most of them are in French, and English is used only if the topic requires. I do have in mind translating some of the material into English, which would require more time than I am willing to spend, however. Should I use automated translation? In 2016, I have started investigating the life of a rather unknown publisher of Brouet's work, Frédéric Grégoire. I am proud to announce that the series will continue: in 2017, the lives of two other mysterious publishers will unfold, namely Octave Bernard, the man behind l'Estampe Moderne - or so-called Moderne! - and the even more elusive Gaston Boutitie (not Boutitié), whose identification materialized when I hit on a single line scribbled in a dusty administrative register. For some years now, I have also had plans for a post on the single most significant individual in the life and work of Auguste Brouet: the print amateur. Maybe 1917 will be the year of the amateur! Anyway,

Happy new year to him!

[1]  I have also included two reference pages, one with some reference journal articles on Brouet with full text, and the other one with web sites devoted to other more or less forgotten but interesting artists of the period. Hum, all in French again, I'm afraid.